A Holiday to Mark on the Calendar

Happy Harikuyo! February 8 in Japan marks Harikuyo or The Festival of Broken Needles. This ceremony, a blend of Shinto and Buddhist beliefs, is thought be over 1500 years old. Harikuyo is observed at temples all over the country as kimono makers, seamstresses, and needle wielders of both sexes lay their broken or bent pointy-headed little friends to rest in huge cakes of tofu.

Reasons for the ceremony are rooted in ancient beliefs that inanimate objects, such as needles, have souls too. To simply trash a bent or broken needle, a tool that has worked for you and given you its all, dishonors the tool and might invite that needle's anger. Can anyone say 'pricked fingers'? As they leave their old needles in the tofu, festival attendees also say prayers for a successful coming year of sewing. 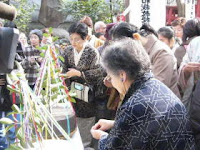 Sashiko ('little stab') the hand-sewing embroidery/darning/quilting stitch from Japan is getting a lot of attention from modern sewers. Everyone likes the classic sashiko style, a clean geometric pattern in even white stitches against an indigo background. The woman on the right, laying her old needles to rest at last year's harikuyo in Tokyo, wears a jacket with what looks like a sashiko-stitched tortoise shell pattern. 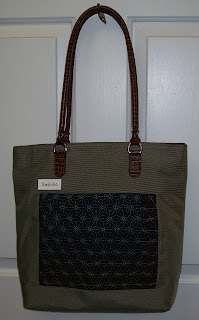 But sashiko is being done in interesting new color combinations in addition to the historic blue and white. At a recent CNA (Craft and Hobby Association) trade show in Anaheim, California, the folks from Colonial Needle exhibited a market bag, one of their new leather accessories from their Lee's Needle Arts division, that displayed a sashiko embroidered insert. I stitched the sashiko insert in the asinoha (hemp leaf pattern) on traditional indigo fabric and used four different colors of perle cotton. 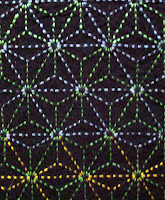 Presencia USA  sells the #8 perle cotton in an amazing color range. The colors used in the bag insert are Medium Blue Delft, Kelly Green, Medium Golden Brown, and Dark Topaz. While the indigo fabric is imported from Japan, both the bag and the sashiko needles can be found at the Colonial Needle site.

Who says people with ADD can't do needlework?
Posted by Pepper Cory at 1:19 PM 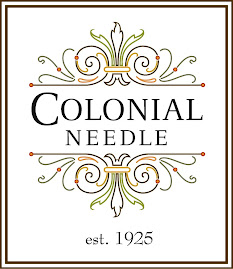